Well, it’s a new year so a fresh blog. Back to 0 models painted and a 0/0 Win/Loss record. I’m starting the year reasonably committed to the Minions plan, and I’ve made some pretty strong strides with them in comfort and composition.

Another big thing this year is that I’m endeavoring to play fully painted. That means minimum progress on anything that I’m fielding, tho ideally fully completed forces. In keeping with that, I’ve joined the Brush Wielders Union: an organization that is designed to promote some specific hobby-focused values that I found to be quite compelling. 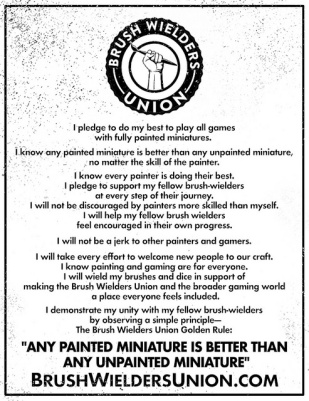 So given that, here’s all the stuff that I completed. I’m still putting the bases on one final unit of Gatormen Posse, so the games were painted enough but not completely done. Once I finish those bases I’ll have my entire Maelok army fully painted to 75 points. Pretty exciting!

One of my favorites was this Bone Shrine. It’s simple, but I really like it. I think it bodes well for how the Sacral Vault will turn out in my paint scheme (coming soon).

The Totem Hunter, which I did in the style that I’ll be using for my Thrullgs and my Bog Trogs: red skin, with a dull copper and metal armor and some bone pieces. Pretty pleased with him.

Another solo: Kwaak & Gub. I love this guy, and the little frog emerging from his belly to cast spells to is just adorable. 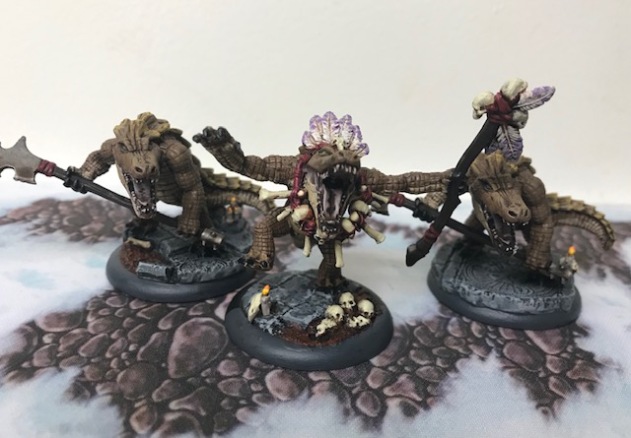 I’ve been trying to get the mix right on Maelok, and I settled on two max Posse and three min Posse. That gives me 19 Gatorman bodies, and the points work out for three solos. Having finished this unit (the purple unit), I have just one maximum Posse unit to go. 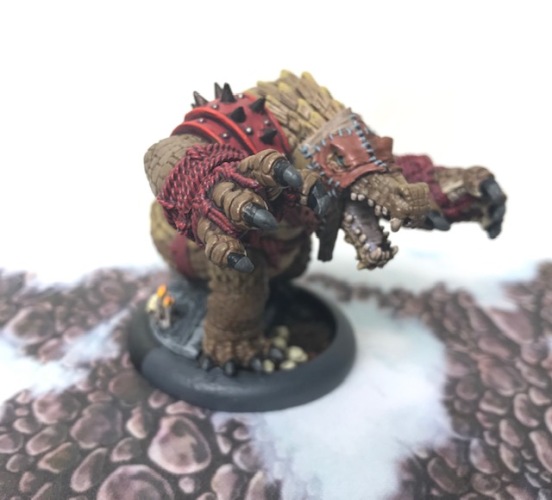 A second Blackhide Wrastler, finished up. I swapped around the colors of his facemask from the other one, but otherwise they’re really similar. Makes for a good pair.

In addition to a heap of painting to start the new year, I also got in a few games.

(Clockwise from top left) All four games I used Maelok, as he’s my painted list currently. So he’s what I’m running. And spoiler alert: all four games were wins by scenario, which is exactly what Maelok wants to be doing. I faced Andy’s Irusk2 list, which was a serious grind. I got up on points because of the scenario, able to clear my own rectangle zone and the left circle zone enough times to win. Second game was against Steve’s Helynna double colossal list. Again, a scenario win thanks to terrain and jamming with Gatormen. They really can be frightening if you’ve got a live scenario. Third and fourth games were against Mike’s Nemo1 Cygnar list. They took place a week apart, and he made some changes from the list after the first game. First time I managed to kill a junior warcaster, which left him short on the left side and enabled a scenario win. Second game I had to be careful as his list had more heavy hitters, but I got lucky in collapsing the right side this time. Nemo1 had to try an assassination with spells that came up short, and I scored the rest of what I needed to win. They were a good set of games to get me more comfortable with unpacking my force and thinking about when Feat is best used.

I don’t think there’s a need for the Warlock tracker any longer, as I’ve gotten to the point where I have enough reps with the front-runners to be comfortable with them. Back to just the basic points-painted and wins/losses record from before I started down the Minions path.