I got in a bunch more games, to keep trying out various Warlocks in preparation for some team tournaments I’m attending in early Spring. But first, painting: I completed my first full Gatorman Posse unit. 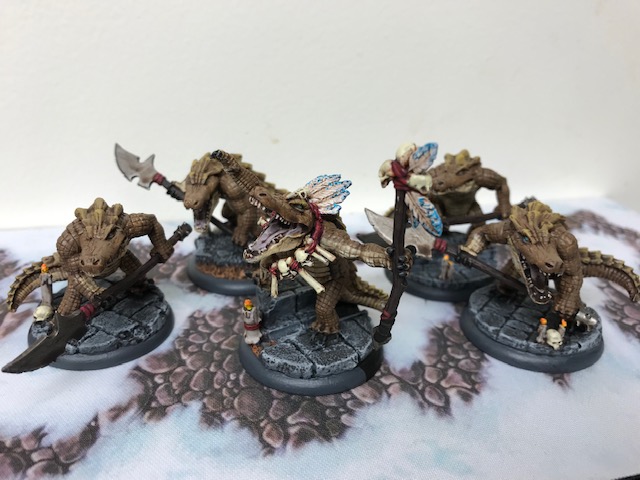 For games, I’m still tracking my different Warlock experiences to kind of get a sense for how deep I’m going in the faction. After this set, I’m at six different warlocks at least hitting the table–but certainly some more than others. 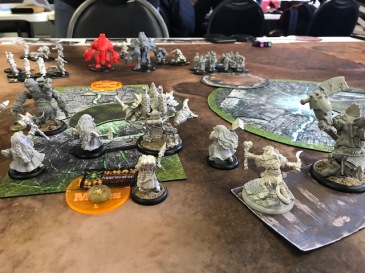 (Clockwise from Left) First up, I played Maelok into Cornelius’ Kryssa list in Legion. Thanks to the pressure that the Gatorman Husks put on his list, I was able to get far too sizeable a lead early on for him to catch up in a meaningful way. Second, it was Maelok again–this time into Steve’s Helynna list. I didn’t crack much armor (especially on Feat), but the scenario pressure was enough to get my the win. Opponents really seem to need to adjust their game plan against Maelok–avoiding the scenario getting out-of-hand seems critical. Third game was my first outing for Dr. Arkadius. I faced Jonas’s Irusk2 Khador list in the Winterguard theme. Arkadius’ threat ranges and silly feat are something I’m going to need a lot of practice with, but I won this game largely due to Jonas being a relatively new player. I’m sure soon enough that Irusk2 list will be causing fits for my force.

(Clockwise from Left) More Dr. Arkadius games! I faced Ben’s Protectorate running an odd Amon list (two units of Idrians rather than all battlegroup). After my alpha strike, he killed four of my five heavies, which made me have to go for an assassination with the fifth. I managed to do so, which was good. It was a game marked by poor plays be me–need to sort out all the bits of the Doc’s technicalities (while also thinking about opponents’ abilities). Next I got in a game against Ryan’s Madrak3 list with my Arkadius force. This list was a real solid one, and while I did a good job clearing the infantry the durability of what was left was a real struggle to get thru. We were tied on control points at the end of 7 turns (8 each!), and it came down to army points destroyed where he hedged me out by 7 points. What a close game! Finally I played Rask into Larry’s Krueger2 in Bones. Was a pretty fierce game, and I expect that if I had gone first it would have come down differently. It was a clear loss on scenario for me. 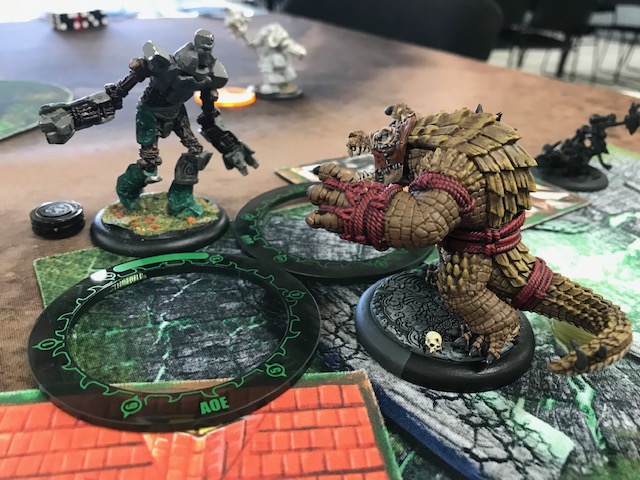 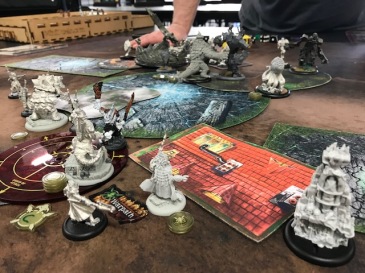 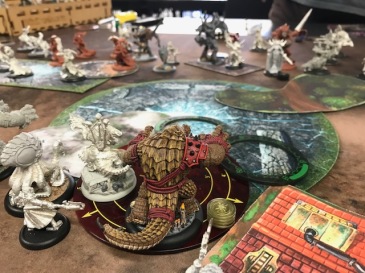 (Again, clockwise from Left) My final two games to report on were both against Larry and his Circle forces. First against Krueger2 again, then against Iona–the new warlock. I dropped a Barnabas1 list that I wanted to at least try out in both lists. I learned a few things. First, I’m unsold on Underchief Mire, the Minions lesser. Free animus distribution is good, but keeping him safe and keeping the warbeast relevant gets much harder to manage. Second, while I like Will Work for Food, I don’t know if Barnabas brings exactly what I need. I’m thinking that Rask is where I want to spend a bit more of my time and thought (though I did have a Jaga-Jaga in WWFF flash of insight that I’m going to at least try).

Overall a great set of games, and definitely feeling like each one I play I’m learning more and more about the faction’s strengths and weaknesses. I definitely am feeling more connected to this faction than others I’ve played. Not sure why. But yeah, I think this is a groove that will last a while.